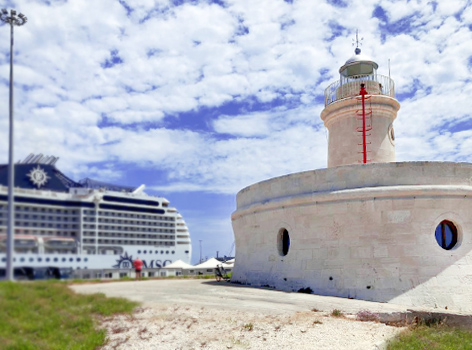 The Bourbon Lighthouse is a small stone lighthouse located on the pier in the oldest area of ​​the Port of Bari , near the cruise terminal .

Active since 1887 (and modified in the following years) , this small lighthouse continues with its red light to signal the entrance to the large ships that crowd daily the imposing port of Bari .

Thanks to over 100 years of history, the lighthouse has also witnessed some dramatic events that have characterized this place, above all the bombing of the Allied ships docked at the port during the Second World War (1943) and the explosion of the American steamship Henderson (1945) , a terrifying explosion that even destroyed several sheds and naval cranes in the area, except for the Bourbon Lighthouse .

Another very interesting aspect The strong link between the Bourbon Lighthouse and Old Bari is worth mentioning, as exactly on the back of the building there is a winding wall which testifies to a very old connection with the ancient village of the city, precisely with the bastion of Santa Scolastica , a connection that was subsequently interrupted to create the current seafront of Bari . 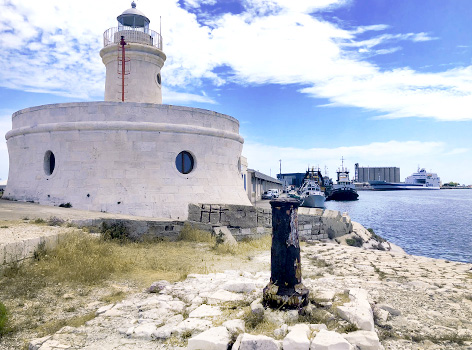 So, if your experience in Bari starts from the port, the Bourbon Lighthouse certainly represents your first attraction to photograph coming from the sea, but also to visit more closely (it is possible to approach and admire it from the outside) ; an unmissable attraction for those fascinated by the beauty of these lighthouses scattered around the world.
What are you waiting for? Start taking the camera!

Are you planning to arrive in Bari by ferry?
Search for a ferry at the best price

Search for cheap hotels in the center of Bari

Search by Tags: what to see in Bari lighthouses of Puglia Bourbon lighthouse lighthouse of bari infopoint porto di bari navi per bari port of bari ferries to Bari