Ponte Adriatico: the cable-stayed bridge, one of the most important in southern Italy, with a tower that lights up in the evening. 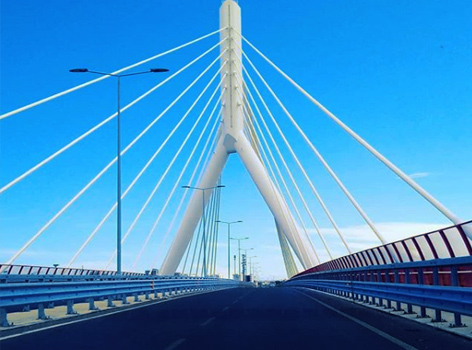 With two carriageways and as many sidewalks, this bridge can be covered either by car or on foot. The central pylon, a characteristic element of the Adriatic Bridge , supports the suspended part of the bridge with stays, and in addition to having a functional role for its structure, it also assumes a function scenographic thanks to its lighting.

In the evening, in fact, the central pylon, shaped like an inverted Y, lights up with white and red (the colors of the city), but during the year the colors also change according to events, so it is not impossible to see the lighted bridge in different colors.

Another interesting aspect of this bridge it is also what was created under it to enhance the spaces.
If you are in fact passionate about Skateboard and Basket you should know that under the Adriatic bridge there is a covered Playground (the largest in Italy) with a concrete skate park and two small basketball courts, arranged shoulder to shoulder, to allow children to train enjoying the shade in summer and a cover for the winter.

Where is the Adriatic Bridge located?